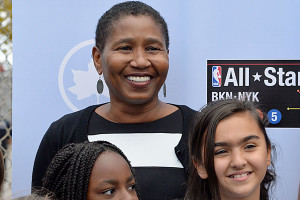 Stoking the fires seems to be the motive of the new NBAPA Executive Director.

Article on CBS Sports
Whether Ms. Roberts is positioning her authority as the new Director is a positive or negative as relates to the player’s, NBA Commish Adam Silver, his staff and the owners, only time will tell.
This particular issue stems from the media and its access to players before and after games which certainly is understandable given the recent outbursts of Kevin Durant, Russell Westbrook among others in response to media questions or even on social media outlets. After all, are we quick to forget the sports phrase of the year so far? “I’m just here so I won’t get fined”.
In reading the article and the ensuing comments that followed these “gems” appeared:
“Classy….the highly paid female executive director on the Players Association feels the need to toss in an F-Bomb when explaining her rationale.  Such professionalism…..”
Yes, as you will see in the article she is quoted as dropping the “bomb” word…or how bout this one:
“The NBAPA, a union that has repeatedly failed to have the commitment to stick together on core issues like pay, when the owners made them miss a couple of months of checks / got close to having to cancel the season, is both beating the war drums and are flagging a ton of big ticket issues total pay, max contracts, rookie deals, and jumping on a ton of side issues.  They are making it sound like they want to strike.  Meanwhile, the owners would love to either:  (1) give back just a little of their last battle to lock in massive profits for the next decade; or (2) if the lockout extends past a month, beat up the union again and get a hard cap.”
However, is this really an issue? After every NCAA game and NBA game a special media room is available to coaches for meeting with the media. Sometimes players of the game are also in attendance, sometimes not.
It would appear to me that simply creating a fuss for the sake of posturing over such a trivial issue could be alleviated by:
Players that have performed well in the game are going to be in demand by the media to provide personally their comments on the game and in most instances players themselves want to bask in the limelight of that performance either in a win or loss situation.
Do media people actually need to be in the locker room to seek out comments from players that did not have significant impact? If they do, why? What exactly is the added value to the media story that will be filed to have a comment from a bench player on their take of this play or that steal? Answer…none what so ever.
Granted many nights the same players will be receiving the media request for time but that should be expected. It comes with being the marquee player or players on the team and from what is expected from them by ownership that is “paying” their contract and the NBA’s need for them to promote the Brand.
In addition, limiting the amount of time for questions to ten or fifteen minutes per each press conference would allow the selected players to have the time to calm down from the physical play of the game, shower and dress, and enjoy post game camaraderie of their team mates without media intrusion into the locker room area itself. Given that time hopefully the players, now in a proper frame of mind when taking the podium with media will avoid possible comments made from emotional perspective that sometimes flow over immediately following the win or loss that has occurred.
Whether it is a privacy issue or not is way over thinking the situation at hand. As relates to access prior to the game the same procedure could be implemented with perhaps one added caveat. That access should be well in advance, minimally two hours prior to tip off or held in the morning or noon hours in either a game day media breakfast or lunch. The media members by all accounts are not known for nor probably ever have turned down the opportunity of assembling where a free meal is offered! Doing such allows the players the courtesy of proper preparation time both mentally and physically that all of them need prior to tip-off, just ask the coaches!
Finally as to the second comment referenced to the article above. (1) the idea that the owners would “love” to “give back a little to lock in” moving forward is wishful thinking and (2) “beating up the union” is probably not how owners would phrase it. The operative word is “lock” and in that regard the future certainly is pointing to exercising by either players, owners or both the right to opt out of the current CBA. In doing so, will come a “lockout” if for no other divisive reason as that which is as mentioned. The impending “massive profits”.
If a season was almost lost and certainly altered last time over dividing up less money what do you think will happen this time as significantly more money is involved along with the perceived viewpoint of many the massive increase in franchise valuation that has occurred for ownership?
featured