Should NBA expand into July? 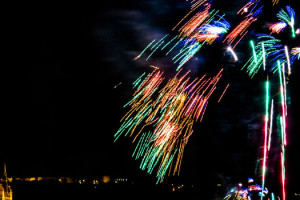 Matt Moore articulated on Mark Cuban’s statement that “everyone’s for expanding the NBA season into July” in a recent story found on CBSSports.com.

League Commissioner Adam Silver is quoted as saying, “I’m trying to balance my own selfish feelings with what’s best for the league here. The league currently takes up: Halloween, Thanksgiving, Christmas, Valentine’s Day, Easter, and Memorial Day. That’s quite a stretch run. Now we’re talking taking up Fourth of July, and with free agency soon after, basically the NBA “year” would run from Halloween through early August. That’s absurd.”

According to Matt, “The NBA wants to dominate the conversation for a longer stretch, while also giving players more rest in-between games.” His viewpoint seems to be, “The best answer, honestly, is just to start the season at Christmas, cut off 20 games, and then run through June.” However he also realizes the stark fact of, “neither the players nor the owners are willing to reduce their income from games.”

The 2014-15 NBA season officially starts when training camps open which this current year was September 27, 2014. The regular season began one month later on October 28th. The fact is that the NBA is of course a sports league but many lose sight that it is also in the entertainment business. Players like other entertainers need time to condition their bodies to provide that entertainment and teams need time to gel even if the players on teams have been playing together in prior years. Entertainers such as actors or actresses take months preparing to play a film role; bands might take weeks to rehearse their song book before heading on the road to tour. Singers take weeks to prepare their voices. Professional athletes in many ways need to have that same ability to prepare to entertain. The current Collective Bargaining Agreement allows teams to participate in up to eight preseason games. If none of the preseason games is played back to back then at maximum that is 16 days leaving roughly two weeks of serious preseason practice to prepare. The bottom line is that is not an overtly abundant amount of time in preparing.

The regular season ends on April 15, 2015 and the playoffs begin on April 18th. There is also now the time taken off to play the All-star game which is 5 days. Therefore the 82 game NBA schedule is played over 164 days. Simple math tells us that is a game every other day over that time span. In reality if that approach were taken then no team needs to play back to back. However in doing so you would be playing in some cases 4 games per week and again that is something the league does not want either.

The playoffs last a full two months. The Spurs clinched the 2013-14 championship on June 15, 2014. Perhaps examining the length of playoff series could be an answer. Does the NBA really need each series in the first and second rounds to be seven games? After all as the series are done by eastern and western conference do we not already know that the 1 seed and 8 seed having already played a number of times during the regular season has really determined which team is better. Limiting to 3 or 5 games certainly still allows for the lower seed to pull the upset. Of course cutting first and second round series to either a best of three or best of five would certainly be more exciting but again we are talking lost revenues from generated ticket sales and more importantly TV and sponsors.

Some suggest adding more players to the roster to allow minutes to be reduced thus saving player’s wear and tear. The teams already have 15 man rosters although they can dress only 12 per game. So as it is currently 3 roster players sit and never play in the game anyway. Each game has a total of 240 team minutes. Dividing among the available 12 players amounts to only 20 minutes per game or less than half a game played by each dressed player. Currently Jimmy Butler has played the most minutes per game at nearly 39 and coaching staffs during the season rest primary players all the time let alone games that are missed by players who are injured. Adding more players to the roster is not the answer to saving wear and tear on the players.

Ultimately the NBA finds itself in a quandary. Neither players nor owners want to sacrifice revenues at the expense of playing a shorter season yet have to validate the enormous television and sponsor contracts achieved by giving what each partner wants and needs in the agreed deals. Make no mistake about it that it is those revenues that are the bulk of the revenues to the NBA with the most meaning. It appears the NBA has reached the point of examining the principle many of us might remember from our Economics 1 class which is the Law of Diminishing returns. The NBA has reached the point at which additions of the input (adding more days to the season) yield progressively smaller, or diminishing, increases in output (spelled fans, TV, Sponsor and marketability support). Mark is a University of Indiana grad and most certainly aware of the principal. In addition, while Mark is known for creating and being controversial so far no other public statement has been expressed in support by either other owners or the NBAPA. As a matter of fact many have expressed the opposite viewpoint. Therefore, the notion that extending the playing season into July is certainly not the answer to the dilemma the NBA has created for itself and will certainly add to the widening chasm of differences and problems that already exist between players and owners in the coming months.