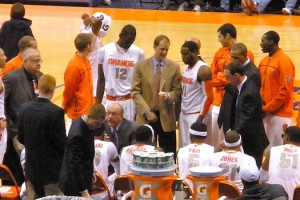 Earlier this season, Syracuse self-imposed a postseason ban from the ACC and NCAA tournaments. This is because of an investigation into impermissible benefits given to players and into academic-related allegations involving former Orange players Fab Melo and James Southerland.

The above is the basis for the CBSsports column that features comments made by Jim Boeheim to Dan Dakich on Dakich’s radio show.

Fab Melo played for the Cuse during the 2010-11 and 2011-12 seasons appearing in 63 games, starting 54 and averaged close to 8 points/6 rebounds during his 2 year career. James Southerland played from 2009-2013 appearing mostly as a reserve for the Cuse but appearing in over 100 games in his career while there. During the two years each played on the roster together the “Cuse” participated in the NCAA tournament losing in the second round in 2011 and the regional final in 2012. Melo entered the NBA draft early and was selected with the 22nd pick by the Celtics while Southerland also has played in the NBA albeit briefly for both New Orleans and Charlotte.

Rakeem Christmas is currently on the Syracuse basketball team. By all accounts he has improved his game and is ranked as one of the top senior players in college basketball, most likely will be named a member of this years All-ACC team and a possible 2nd round pick in this years NBA draft according to multiple outlets. Appearing in the NCAA tournament and playing well could quite possibly improve his positioning in that draft. Unfortunately that will not happen.

Why? Because he is being punished for the transgressions committed by former players and others unnamed people within the Cuse program. However, former players Melo and Sutherland played in the NCAA tournament and both had the opportunity from those appearances to bolster their image leading to the opportunity to play in the NBA because of it.

To members of the NCAA and administration of Syracuse. What’s wrong with this picture?

This ongoing situation in dealing with former program transgressions uncovered is and has been a wrong policy continued by the NCAA that clearly needs to be rectified. The continuing practice of punishing current players who by all accounts knew nothing of the former transgressions committed is absolutely unfair by any standard. The fact is many other actions could be taken that would be fair when these types of transgressions are uncovered. Current players should not be held accountable for “past sins” of the program.

What penalties and suggestions could be considered immediately.

Will the above stop all these types of transgressions from happening in the future. Probably not, but it will create an immediate righting of a wrong which is penalizing current student athletes who neither committed the transgression or knew anything of it and place blame in a manner on those that should be held accountable. At the very least current players such as Rakeem Christmas and many others will not suffer potential financial harm in their future from penalties stemming from the transgressions of former players and or staff members and really, NCAA why should they?