Regarding NCAA, NABC Proposed solution to stay or go? 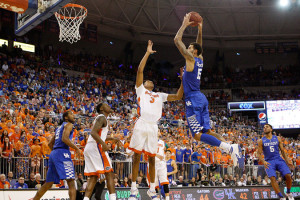 An article written by the Senior Writer Andy Katz of ESPN is one of many on numerous sports sites of the impending “proposed solution” that includes the NBA, NCAA and NABC.

The articles report on a proposed solution to prevent underclassmen from leaving early for the professional opportunity of NBA contracts if the players are not assured of being a high pick.

The basic issue continues to revolve around college basketball’s one-and done and those underclass players leaving school “early” to enter the NBA draft. In reality it points out once again the basic difference of opinion between the NCAA and NBA that exists in each other’s philosophy and business models. The NBA is an athletic entertainment for profit business while the NCAA and its Presidents are locked in the conundrum between admitting to themselves the importance of the revenues received to all of college athletics and the billion plus dollar business big time basketball is versus the student first educational mission process of the institution. Unfortunately, the NABC and the players themselves have been caught in this crossfire for some time.

University of Kentucky coach John Calipari is quoted, “This may be one of the best things the NABC has ever done, Now, when you put your name in, if you’re not invited that should tell you to go back to school.” “Now after the combine you can make a decision — go back to school or choose to go.” What Coach Cal is referring to is the proposal that underclass players now would be able to participate in a new invitation-only combine conducted in May that would enable NBA teams to evaluate players and offer feedback directly of the players draft status.

Sam Vicenie in his column on CBSSports.com said the following. “This is an absolutely terrific proposal. There is no downside to this for the players, as they’d make more well-informed, smart decisions on their draft stock. If the goal of college is to prepare 18-22-year-old kids for the next portion of their lives — be that athletically or in other fields — the goal should be to provide them with as much information as possible so that they know when it makes sense to move forward with their life in order to maximize their potential for income and general well-being. By extending out the deadline, athletes will now have a much more information with which to make that decision, which is incredibly important.”

The question, is all this necessary? There are times when it is not necessary to “reinvent the wheel”.

Currently, the entire college basketball season offers up multiple opportunities for advanced scouting of college players by NBA scouts that handle that responsibility for every NBA club. The University of Kentucky as a matter of fact held a practice this year that drew much attention where NBA teams were on hand evaluating the UK players. During TV broadcasts cut-away’s show high level NBA team personnel and GM’s in attendance at games that feature perceived first round players.  Literally, every sports site of major consequence provides its viewpoint of mock-up NBA draft boards and compiles a list of the perceived top 100 or so players not only in college but international rising stars as well.

There is no question that the amount of time given to college players to announce their intentions of whether to stay or go is short. The stated reason seems to be the early spring signing period of college basketball and the confusion related of awarding future scholarships available. However, there really is not any confusion as to which 40 players the NBA teams have serious 1st round interest in.

Currently many sports sites that nationally cover college basketball promote and list the top 100 players that the NBA thinks will be candidates as the season progresses. Furthermore, they produce and update regularly mock drafts during the college basketball season and base those drafts on the perceived needs of NBA teams as they progress during their own season. College players can and certainly are aware of and see these mock drafts as do their coaching staffs. What is also important to realize is that in examining the past few years these mock drafts have been very accurate in predicting the top players chosen. While the mock drafts of the top eligible players may not be 100 percent in predicting the exact order the players are taken, one thing can be said, the top 40 players listed usually are those that eventually make up the group that is selected in round one by the NBA. This is significant because it is only the 1st round selections that are guaranteed an NBA contract. Second round selections will play on summer league teams or be invited to training camp. If eventually unsigned, the player is relegated to either overseas opportunities or playing in the NBDL.

Therefore some simple analysis for any underclassman in college basketball:

In addition, if the NABC and the NCAA want to have a definitive impact on the players leaving they should realize that those underclass players projected (1-25) to be first round selections will in most cases take that opportunity. History shows the mock drafts to be accurate in terms of the top 20 to 25 selected. However, the NCAA should allow any school to address with that player the option of staying in school and allow schools to offer the player an insurance guarantee policy. The policy value would be based using a formula of expected value of the guaranteed contract potentially available times the same three year guarantee provided by the NBA of rookie contracts. The schools based on revenue generated by its program and the NCAA itself could easily draft a proposal that appeases both and together provide the premium payment on such a policy. The policy would pay out to the student athlete if an injury was suffered that altered their future in their decision to stay as opposed to entering the draft now. The NCAA would be protecting college basketball and its massive revenues as well as protecting the future of non-revenue sports on campus by assuring the players that they would be sacrificing nothing by staying to include their potential earning power if a devastating injury might occur.

The players and college coaches have access to massive amounts of outside analysis already from multiple sources to determine their players individual draft prospects. Those sources as stated have been historically accurate in the analysis provided.  What they do not have is: