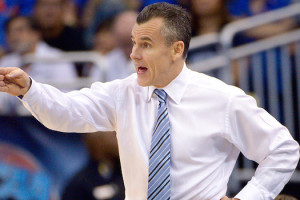 Someone within the sports media over the years has always raised the issue each and every time an NBA club has made the choice to hire a college basketball coach. The issue always seems to be that many of the college coaches hired over the years for NBA head positions have not had nearly the success on the pro level as they had in the college ranks. Today, it appears the current mindset of NBA owners is that when firing the existing coach and making a new hire winning is expected immediately if not sooner. It is pretty obvious though that any NBA team not currently winning, coaching changes most likely are not going to improve the situation in the first place, especially in the NBA where multi-year or long term player’s contracts handcuff teams from altering the existing roster.

Coaching changes in the past were pretty simple in the NBA. If you won you kept your job. If you lost, it’s goodbye. Today however the dynamics are different. This season, so far, Monty Williams and the Pelicans said adios. Most writers though agree he did a credible job with the transformation of the Pelicans roster especially with a now healthy Anthony Davis. The current situation being reported out of Chicago is another example. Tom Thibodeau appears to be on his way out with a winning record. Then we have the Thunder situation. Yes it is true the Thunder missed the playoffs. This year’s team was hampered the entire year with injury to both Durant and Westbrook. Scott Brooks for the most part had the same roster that one year prior won 59 games and lost to eventual champion San Antonio in the Western Finals, yet goodbye Scott Brooks.

Therefore rule number one about being hired to coach within the NBA is apparently true? The clock starts on the day you’re hired towards the eventual day that you will be fired.

What then is a criterion to be successful as an NBA coach? Only 12 of 30 NBA head coaches during this past season have actually played in the NBA. Therefore, actual playing experience is not required. As further proof, since 2005, 6 NBA championship teams have been coached by Eric Spolestra and Greg Popovich, neither have NBA playing experience. The other four, the Lakers (twice), Mavs and Celtics were coached by a former player but realistically, even by their own account, would any of them consider themselves among the greats to ever play the game. Results of coaches that have NBA playing experience is mixed as well. On the one hand Steve Kerr and Kevin McHale for example have done remarkably well this year. On the other there is Byron Scott and Derek Fisher.

What it really comes down to are the current players on the roster of the team hiring. Therein lies the main reason why college coaches have up till now been unsuccessful. A quick look at the teams inherited quite simply outline that winning was unrealistic in the first place.

Then there are the cases of Tim Floyd, P.J. Carlesimo and Brad Stephens. Tim Floyd assumed the Bulls head position in 98. The year before the Bulls won the championship. However, Phil Jackson left, Michael Jordon retired as did Pippen and Rodman left the team. The starting five of the championship team of Jordan, Pippen, Rodman, Ron Harper and Luc Longley was replaced with Toni Kukoc, Randy Brown, Mark Bryant, Dickie Simpkins and Harper. The result based on the dominance of the Bulls success in prior years was a forgone conclusion. How confused do you think was Ron Harper that year in going from delivering the ball to Jordan and Pippen to one year later Brown and Simpkins?

Carlesimo inherited a Portland team that finished 7th in the western conference but arguably traded its best player Clyde Drexler in the offseason thus altering the leadership of the team. Stephens took over a Boston team that broke up the championship core of Garnett, Pierce and Allen that lost in the 1st round to the Knicks the strike shortened year before.

The point is, college coaches that have been lured into the league have historically taken over teams that were terrible the year before, or have had management altered teams where winning was not realistically conceivable.

Ultimately, NBA championships are won by great players that are playing at possibly their highest level of their career. The last ten years Kobe, Duncan, LeBron and D-Wade have all played and won leading their respective teams. All without question winning during what would be considered the prime of their careers.

The hiring of Billy Donovan in Oklahoma City is really the first time a college coach is being given the head coaching position of a team that most everyone considers a championship contender assuming Durant and Westbrook play the season without significant time off due to injury. Given his success in coaching two NCAA national championship teams that included current NBA players Noah, Horford and Brewer along with other UF players that have had successful NBA careers that include Mike Miller, David Lee, Udonis Haslem, Brad Beal, Matt Bonner, Chandler Parsons and others, BillyD certainly has proven the ability to prepare NBA talent. And finally, Donovan has played in the NBA so he is certainly aware of the lifestyle NBA athletes live and the rigors of that lifestyle as it pertains to performing at such a high level while maintaining the necessary composure and smarts off the court.

While a crystal ball might be the only way to truly know what the future is for the Thunder under Donovan or Hoiberg if he is eventually the one to take over in Chicago, one thing is certain. Billy as would Hoiberg are inheriting teams that for the first time will see a college coach with the legitimate talent in the lineup, if healthy, to contend for the NBA championship and the overriding result next year will either debunk once and for all the myth of college coaches jumping to the NBA or offer the ultimate proof of why college coaches can’t seem to find success.